The economic and demographic changes that followed World War II profoundly affected California. The population expanded as people migrated west lured by the promise of employment, warm climate, optimistic outlook, and growing prosperity. As the state emerged from the postwar years, its artistic community flourished. Freed from the constraints of New York and Europe, California became a preeminent and influential center of design. The Los Angeles Times Home magazine referred to its residents as the “design-intoxicated postwar generation.”

With roots in the Bauhaus and European and East Coast modernism, the modernist aesthetic came into its own in California. Moving away from the austere, hard-edged look of its precursors, California modernism was organic, naturalistic, textural, warm, and colorful. It reflected a revival of crafts and the adaptation of industrial innovations to artistic use. Pioneers in this movement, Jerome and Evelyn Ackerman were an integral part of the creative energy of the period.

From 1950 to 1975, Los Angeles was a major center of modernist design. The work of architects Richard Neutra, Pierre Koenig, Craig Ellwood, A. Q. Jones, and others were showcased in the Arts & Architecture Case Study House program. As the housing market exploded with the proliferation of modern homes in suburbia, the demand for well-designed home furnishings grew.

A number of contemporary stores on the West Coast as well as others throughout the United States sold furniture and accessories designed and produced by exciting young artist/craftsmen that fit into these new homes. Retail stores such as Design Center (San Diego); Frank Brothers (Long Beach); Van Keppel Green, Jules Seltzer, and Curt Wagner (Los Angeles); Frasers (Berkeley); Siebert’s (Portland); and Del Teet and Keeg’s (Seattle) played a critical role in creating a customer base for designers like the Ackermans.

The American Crafts Council was very active and many of the artist/craftsmen who were at the forefront of the movement were members. There was an ongoing discussion about what constituted art versus craft. Publications such as Arts & Architecture, Design West, West Coast Source Book, Interiors, Interior Design, andCraft Horizons were important nationally in showing the work of these new designers.

Perhaps the most influential vehicle for the promotion of California modernism was the series of California Design exhibitions held from 1954 through 1976. Twelve of the 13 California Design exhibitions (eight annuals from 1954 through 1962; three triennials in 1965, 1968, and 1971; and a bicentennial show in 1976) were held at the Pasadena Art Museum. The final show took place in 1976 at the Pacific Design Center. The California Design exhibition was instrumental in making the state a recognized national player in design and focused on objects from home furnishings to decorative accessories to consumer goods. When Eudora Moore became director in 1962, she instituted a jury system and expanded the size and documentation of the shows. She believed that California was “an incubator for contemporary design.” Jerome and Evelyn Ackerman had the rare distinction of being included in every California Design exhibition, underscoring the importance of their contributions to California modernism. Many of the pieces are featured in the current exhibition “A Marriage of Craft and Design: The Work of Evelyn and Jerome Ackerman” at the Craft and Folk Art Museum (January 23–May 8, 2011) and the recent exhibition “Masters of Mid-Century Modernism: Evelyn and Jerome Ackerman” at the Mingei International Museum. 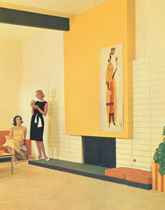 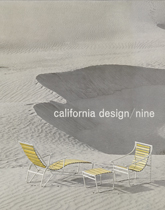